The Colchester Bible Baptist Church began as a small Bible study group with only a handful of believers in 1962.  The first service was held on October 11, 1964 in the Knights of Pythias Hall with approximately 25 people in attendance.  Pastor Joe Wagner preached the first service and Bill McMahon led the Sunday School department.

Early in 1966, Rev. Dwane Sweet became the pastor.  It was during his ministry that the move to the Colchester Grange Hall took place.  However, that faithful group had a goal;  from the church’s inception, their prayers were for a piece of property and a building of their own to use for the praise and glory of God.

Colchester Bible Baptist Church purchased its present property on Chestnut Hill Road in late 1970; and a ground-breaking ceremony was held on August 27, 1972.  This new building was a blessing and delight to all, providing needed classrooms, nursery, parking, and kitchen facilities.

Pastor Doran Edwards was called to be pastor on June 17, 1968, and faithfully served for 29 years until the Lord called him home on February 10, 1997.  Pastor Eric Smith served the Lord with us as Assistant Pastor from August, 1994 to July, 2004.  Rev. Bill McMahon, who was instrumental in the beginning of the church and was already known and loved, became pastor in September, 1997 and retired in July, 2006.  We called Rev. Mark W. Love as our next pastor in April of 2006 and he and his family joined us in July of that same year after Pastor Bill McMahon’s retirement. 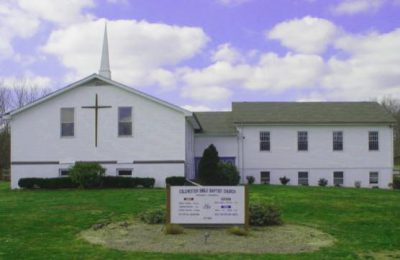